Some of you may have read a few of my past posts about how I have physically been having a hard time. Well now my friends after 4 years there are answers! The culprit? Dysautonomia.

the body that we do not consciously think about, such as heart rate, blood pressure, digestion, dilation and constriction of the pupils of the eye, kidney function, and temperature control.” Think of Dysautonomia as an umbrella, and under that umbrella there are different types. The doctors think I have a type of Dysautonomia called Postural Orthostatic Tachycardia Syndrome (POTS). Dysautonomia can be caused by something, it could be genetically inherited, and it could even just come out of nowhere. Most of the time it appears from an underlying cause. In my case it seems to be caused by a vestibular issue due to head trauma. Head trauma doesn’t have to be from anything severe either; my head trauma came from fainting when I was pregnant with my second child. I know I hit my head a few times fainting but no one ever realized when I hit my head that it led to a whole other series of events. Who knew right? 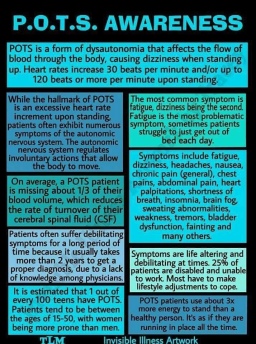 Now to the fun part!

So now that we have learned what dysautonomia is you say, what does that look like? First and foremost I look like everyone else on the outside.

But on the inside I feel like this… All. The. Time.

Some days and times symptoms can be really bad, which are called flares. Flares can last for hours to weeks, for some people they can last longer.

Having children while also having dysautonomia can be a serious challenge. There is a lot of changing plans, a lot of rest days, and whining from everyone. While everyone likes to be outside in the summer, the heat can complicate that. Temperature regulation is one of the things the Autonomic Nervous System controls; I personally have heat intolerance, which means first off that I feel hot 24/7 so being outside in the summer feels like I’m dying. Frequent headaches and migraines are another fun thing. Stress, heat, doing too much, etc. can throw off your body causing a migraine. In someone who has dysautonomia their blood pressure can’t regulate very well (guilty again) which means that standing and walking for long periods of time is very hard. That goes for me as well, so things that most people take for granted are extremely hard for me; such as grocery shopping. With that said though dysautonomia isn’t going to keep me from living my life.

While my family is incredibly supportive of my needs, my spouse is the one that’s there on a daily basis and can see the changes that happen more closely than anyone else. My spouse is SUPER supportive of what my body needs at any given time and I’m incredibly thankful for that. When I say I can’t do something, I very literally mean that I physically can’t do it. I have used every ounce of myself that I have to give and then some, and he unequivocally respects that (most of the time he makes me stop first because otherwise I will pay for it later, meaning a very good sized migraine and bed rest the next day). If I have hit that limit and need to lay down for a while it’s cool, he will lay down with me and we will watch a movie while I recuperate. Horrible migraine? He will grab my medicine for me and rub my head.  If I need anything he is right there to help and vice versa if he needs anything. Open and honest communication of what our needs are is incredibly important for both of us.

While I have all the support in the world there are still things that no one but me can work through. The hardest thing for me to process (I’m still working on this) is that I didn’t used to be this way… I feel trapped in a body that won’t do what I want it to do, that it used to do with such ease… and it’s absolutely frustrating. Like I said earlier I can’t go grocery shopping like I used to, no more waking around the store for as long as I want now its online ordering and pick it up from the store. The other thing I struggle with is making plans in advance… I worry- What if it’s a flare day? Will I have a migraine? What about the dizzy spells? How much energy can I spare? How much time will I have to recover before I have to be back at work?

I know that I can’t do things as I used to, it sucks but what can you do right? All I have to do now is find my limits and see how far I can push them.

View all posts by Becky